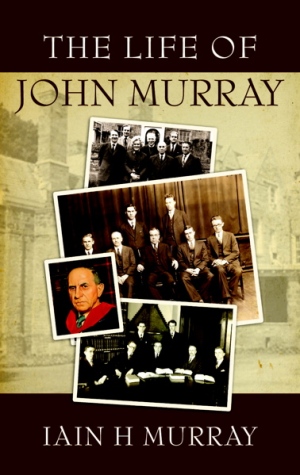 I don’t believe the Bible is a book of heroes. The Bible does have heroes in it, but that is not what it is about. It is a book about the Hero. Nonetheless, I do believe in having heroes, and I believe it is Biblical to have them.

Heroes are not perfect, and thus they point us to Christ in three ways. Their faults (weaknesses and sins) point us to the Savior that they, and we, all need. With this foundation we learn two further truths concerning their strengths. First, they are a result of God’s gifting and working in them such that He gets all the glory. Second, their strengths also point us to Jesus by whom they are graded – Jesus is the ultimate curve breaker. All heroes are judged in relation to Him.

Every year I single out one hero to study in particular. This year I will study the life and works of John Murray.

John Murray was a Scottish theologian. Before ministry he fought in World War I serving with the Black Watch Regiment and lost an eye to shrapnel. After studying at the University of Glasgow he attended Princeton and then began teaching there, but soon left following J. Gresham Machen to teach systematic theology at Westminster Theological Seminary in 1930. He remained there until 1966. He then married Valerie Knowlton and retired to Scotland; ultimately retiring from this world on May 8, 1975.

He is best known for his work Redemption Accomplished and Applied and his commentary on the book of Romans. Of that commentary John Piper has said, “Murray was a systematic theologian at Westminster but like Charles Hodge, he wrote an absolutely amazing commentary on Romans. In one sense, I don’t think any commentary has surpassed Murray in theological depth and precision on the book of Romans. The sentences are complex and carefully crafted and they are penetrating in the depth and scope of their theological richness.” At a lecture at Westminster, Piper added, “So in my early days, Romans was the key, watershed document to turn my world upside down. And you know who it was who guided me through Romans? John Murray. That is the most beautifully written commentary on the planet. People who write commentaries are not generally good writers. They patch things together… I read a sentence, and I just want to go back and memorize it because his eloquence is phenomenal. The work that must have gone in to the way he says what he says about the glories of Romans 5 or Romans 8 are amazing, so I thank God for John Murray.”