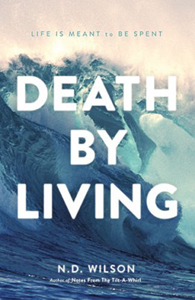 N.D. Wilson is one of my favorites. In my opinion Death by Living is his best.

Most men die by dying. Few die by living. Jesus lived. Jesus died, which is again to say, He really lived.

Here are smelling salts for your soul.

Jesus was born in a motel barn. To a teenage mother still slandered to this day. To an adoptive father who many believed (and believe) to have been a cuckolded nitwit. Jesus, the Word made physical, the Man born for trouble we cannot comprehend, was placed in a trough. He would trigger (but escape) a genocide. And he was just getting started. He would experience betrayal, profound brutality, and death before He even reached my own ripe age of thirty-four. He had come for exactly that reason. He had come for death, for a bride living (and dying) beneath a curse.

He was Adam done right.

Loosen your jaw and begin chewing, this gristle is tough. Adam, living in his story rightly, would have done the same. Adam would not have been the well-behaved Mormon teenager, abstaining from the fruit. He would have looked at Eve, seen her curse, seen her enemy, and gone after that serpent with pure and righteous wrath. He would have then turned to face the pure and righteous wrath of God Himself (that Adam had just imaged), and he would have said something quite simple, something that would be said by another, thousands of years later.

Adam could have been conqueror rather than conquered. Regardless, fallen or unfallen, he was born to die. So are you. So am I.  Life is a story. Why do we die? Because we live. Why do we live? Because our Maker opened His mouth and began to tell a story.