“I feel a strong desire to tell you—and I expect you feel a strong desire to tell me—which of these two errors is the worse. That is the devil getting at us. He always sends errors into the world in pairs—pairs of opposites. And he always encourages us to spend a lot of time thinking which is the worse. You see why, of course? He relies on your extra dislike of the one error to draw you gradually into the opposite one. But do not let us be fooled. We have to keep our eyes on the goal and go straight through between both errors. We have no other concern than that with either of them.” —C.S. Lewis 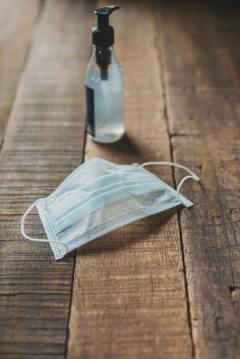 To mask or not to mask? This is not the question we should be zealous to answer. To be charitable or to condemn, that is the question. In the first instance, God has not spoken; wisdom is called for. In the second, an authoritative answer is readily available—show charity.

“As for the one who is weak in faith, welcome him, but not to quarrel over opinions. One person believes he may eat anything, while the weak person eats only vegetables. Let not the one who eats despise the one who abstains, and let not the one who abstains pass judgment on the one who eats, for God has welcomed him. Who are you to pass judgment on the servant of another? It is before his own master that he stands or falls. And he will be upheld, for the Lord is able to make him stand. One person esteems one day as better than another, while another esteems all days alike. Each one should be fully convinced in his own mind. The one who observes the day, observes it in honor of the Lord. The one who eats, eats in honor of the Lord, since he gives thanks to God, while the one who abstains, abstains in honor of the Lord and gives thanks to God. For none of us lives to himself, and none of us dies to himself. For if we live, we live to the Lord, and if we die, we die to the Lord. So then, whether we live or whether we die, we are the Lord’s. For to this end Christ died and lived again, that he might be Lord both of the dead and of the living. Why do you pass judgment on your brother? Or you, why do you despise your brother? For we will all stand before the judgment seat of God; for it is written, ‘As I live, says the Lord, every knee shall bow to me, and every tongue shall confess to God.’ So then each of us will give an account of himself to God” (Romans 14:1–12).

Concerning days and meat, Paul laid down guidance elsewhere in his letters to guide the weak in conscience into maturity. Still, Paul was zealous not to cause a brother to sin against their conscience in such matters where there is liberty. Now if Paul did this, in areas where God’s truth does give guidance, how much more charity should we display in an area where God has not spoken.

Wisdom and lies can be found on both sides of the question we are not asking. Who is sufficient to answer that question? Let each soul research for himself. May each soul feel liberty to do so without condemnation. What is not sin should not be judged as such. If either side thinks itself superior, they have assumed a God-like omniscience. Our father Adam may have eaten from the tree of knowledge, but he thereby plunged us into ignorance. He desired to be like God, but the apple fell far from the tree. Let us not add sin to sin by thinking the eating had its desired effect. We are far from perfect knowledge.

Even more concerning, is that by seeking to bind your brother’s conscience to your own, you have established yourself as the standard by which to judge. We crooked twigs shouldn’t try to play as though we were the official and standard yardstick by which all measurements will henceforth be made. We should not even advocate for a particular collective twig position as though that were the standard. If every ruler in the world were shaved down to eleven and a half inches, a foot would still be twelve. We don’t measure up. And concerning masks, God gave no measurement. Be your head masked or not, your nose shouldn’t be upturned toward your brother, but bowed before your Maker.

Feel free to point out how you believe the government is making a totalitarian play and warn of the dangers of being a lemming. Feel free to speak of how concern for your brother and respect for the established authorities are strong grounds for wearing a mask (where masks have been mandated, a separate conversation is necessary). But above all of these, wherever you may land, eschew demonizing your brother and prioritize charity. And farther up still, shout loudest about that which is most worth joyfully shouting—the gospel of Christ. And though one brother do so with a mask, and another without, may both do so praying for one another. Though these brothers may socially distance themselves out of respect, may they be spiritually united, longing that the good news prove graciously contagious, for therein lies the ultimate cure for all that ails us.

One thought on “To Mask or Not to Mask?”