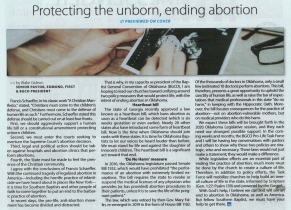 “In recent days the pro-life, anti-abortion movement has become divided and distracted.

That is why, in my capacity as president of the Baptist General Convention of Oklahoma (BGCO), I am hoping to lead our churches toward unifying around two policy measures that would protect life, with the intent of ending abortion in Oklahoma.” (emphasis mine) —Blake Gideon, “Protecting the Life of the Unborn, Ending Abortion” in the August 1st, 2019 edition of The Baptist Messenger

[DISCLAIMER: The “you” addressed below isn’t merely Blake Gideon in particular but the leadership of the BGCO in general. In some of this I’m reading between the lines, but I think I’m doing so with great warrant and am open to reproof if I’m wrong.]

A bill that would have ended abortion altogether in our state was spoken against. Now we’re to be gung-ho about a couple of bills that would still allow for abortion (the first in the case of children younger than approximately 6 weeks, the second under the vague category of “the health of the mother”). Pardon? If I speak for abolition, against your recommendation, I’m being divisive. If I don’t wholly support the bills you endorse, I’m being divisive. Am I missing something?

Let’s say that it is me who is sowing division, the real question is should I be? Rather than hash things out on the level of accusations of not sharing or being selfish (meaning unity and divisiveness), let’s talk about what may be and what shouldn’t be shared. Toothbrushes shouldn’t be shared; candy, necessitating said toothbrushes, may be shared. Rather than calls for unity, let’s find out if we’re unified. Yes, we all agree abortion is evil. Yes, if we can run the ball down the field for five more yards I’m ok with that so long as you’re playing to win (and a gain of about five yards is the most I’d expect from such a play). But I’m left wondering if you really want to win this game or just run the clock into overtime again and again so as to pull in more at the concessions.

Forgive me, I do believe the BGCO has good intentions, but I am scratching my noggin trying to figure out how that is so. The reasons for not supporting a bill to end abortion coupled with the reasons for supporting bills that limit abortion don’t add up in my mind. Let’s have the conversation there. If at the end of the debate we disagree, that will prove illuminating and helpful.

Instead of shouting “Share!” when it’s convenient for your toy and “Selfishness!” when it’s ours, let’s vigorously argue for when we should share and when we’re being selfish. Paul and Barnabas departed ways over John Mark. Who was right? I don’t think there was a “right,” but it was ok for them to amiably part ways. Concerning abortion, we’re not dealing with something so innocuous. If Paul and Barnabas could argue and part over Mark, then we should certainly be able to do so concerning abortion. I believe there is a clear right and wrong here. Calls for unity are then a call for silence; a call for one party to sear their conscience. I’m not eager for a parting, but I would like a conversation (here you’ll find a series of posts with questions I’d like answers to). If we can’t come to an agreement, we might not be able to play together anymore, but we can walk away from each other like men.